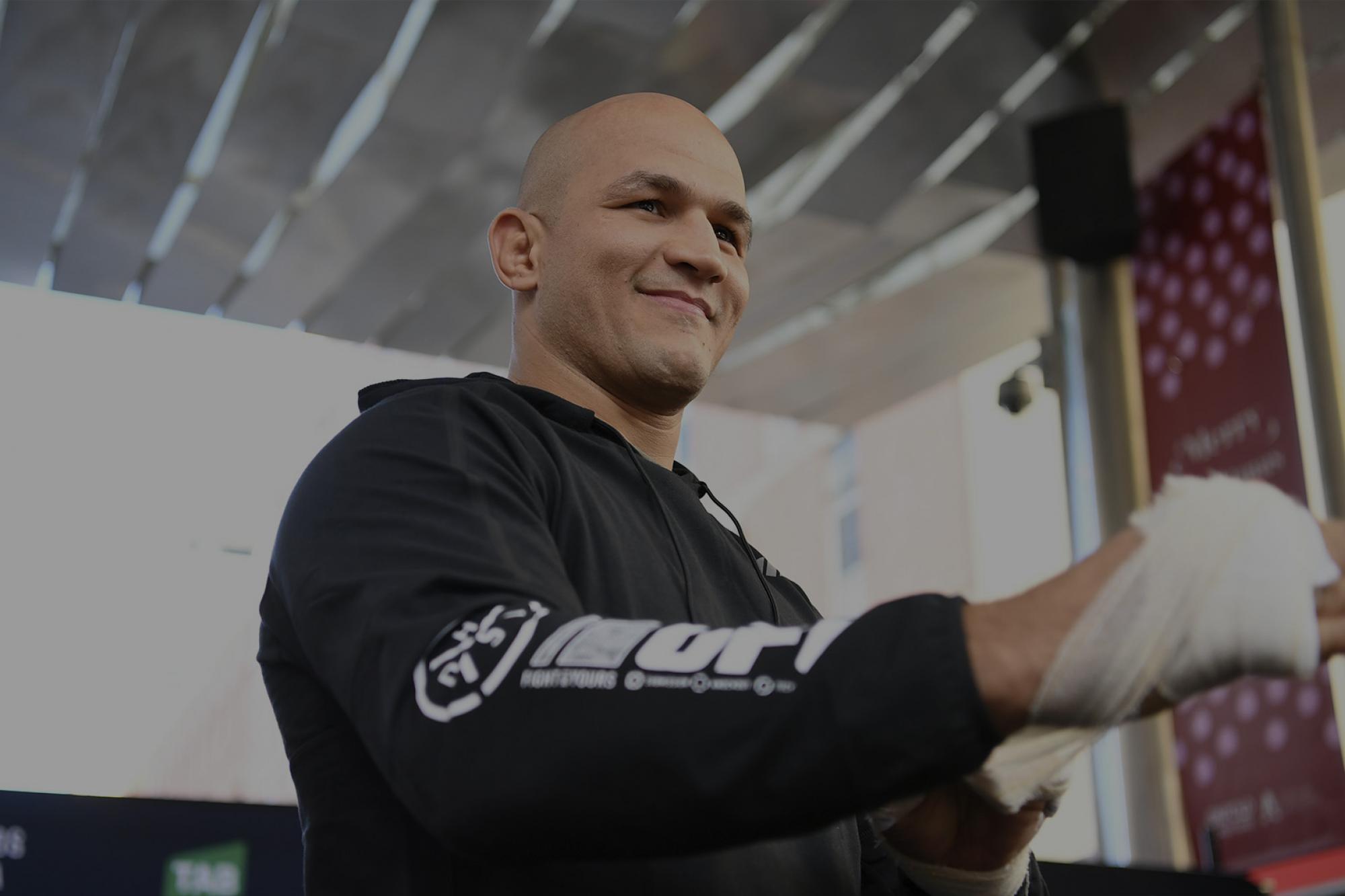 “My last (few wins) were all decisions, so I needed that kind of victory, to finish a fight,” Dos Santos said of his second-round stoppage win over Tuivasa in December.
By E. Spencer Kyte • Mar. 7, 2019

Over a five-year stretch between May 2012 and May 2017, Junior Dos Santos fought eight times, alternating wins and losses.

When the run began, he was the UFC heavyweight champion, having won the title by knocking out Cain Velasquez in 64 seconds in the very first UFC bout to be televised on the FOX network. After successfully defending the title once, he dropped the belt to Velasquez, setting the “win one, lose one” pattern in motion.

Despite having spent the whole of his UFC career in the thick of the title chase, the “four up, four down” stretch left many observers pondering if the Brazilian standout’s best days were behind him, as the victories were harder to come by and the losses got progressively worse, culminating in a first-round stoppage loss to then-champion Stipe Miocic at UFC 211.

Junior Dos Santos returns to the Octagon in an epic heavyweight battle against Derrick Lewis in the main event of UFC Wichita.

And just when it felt like it couldn’t get any worse, Dos Santos was flagged for a possible anti-doping violation, which not only scuttled a showdown with rising star Francis Ngannou, but prompted the standard chorus of questions and character assassination that traditionally accompanies such an announcement.

But after a lengthy investigation, Dos Santos and several other Brazilian fighters who had been flagged were determined to have taken tainted supplements and were cleared to return.

After a victory over Blagoy Ivanov in his return to action in July that kept the alternating wins and losses pattern intact, Dos Santos ventured down under to square off with unbeaten upstart Tai Tuivasa in a bout that felt like a quality measuring stick matchup for both parties.

For the young Australian, it was a chance to prove he was a contender and ready to hang with the top talent in the heavyweight division, while the former champion had the chance to re-affirm his standing as one of top heavyweights in the UFC and finally put a stop to his inconsistent ways inside the Octagon.

“My last (few wins) were all decisions, so I needed that kind of victory, to finish a fight,” Dos Santos said of his second-round stoppage win over Tuivasa in December.

It was a vintage performance for the Brazilian veteran, who spent the first round forcing the young Australian to follow him around the edge of the cage, connecting with an array of strikes before weathering the best the unbeaten bomber had to offer late in the frame. Early in the second, Dos Santos was able to connect with a sharp, short right hand as Tuivasa was circling away that felled the previously unbeaten talent.

The savvy veteran pounced, moving right into side control and unleashing a string of elbows before climbing into mount and bombing away, prompting referee Herb Dean to step in and bring the festivities to an end.

As much as Dos Santos valued the finish, he relished the opportunity to compete twice in six months even more and carries that same mindset into this weekend’s main event pairing with Derrick Lewis in Wichita.

“Being without a fight is frustrating — it’s very bad, especially with that USADA thing,” said the affable Brazilian, who went 13 months between his loss to Miocic and win over Ivanov last summer in Idaho. “Thank God it’s all in the past already. I don’t want to go through those kinds of things any more.

“I needed this (to get back to fighting regularly) to keep things happening in my life and keep my career happening. It was very, very important to me and it has been important because I’m fighting again. My last fight was December 1st and now I’m fighting again and that’s what I want to do.

“The way it was against Tai Tuivasa was great and I want to keep things happening that way because it was important for me to fighting soon again because like I said with the timing thing — you have to have that timing in order to be able to use those skills.”

Go inside the life of UFC heavyweight Junior Dos Santos as he prepares for UFC Wichita.

With a pair of victories in six months last year and another relatively quick return set for this weekend, Dos Santos feels primed to make another run at the heavyweight title and the timing seems right. The division has been in a state of flux since last summer, when Daniel Cormier ascended to the throne, creating a situation where every big fight in the division feels like an audition for a possible title shot in the not too distant future.

Having spoiled Ivanov’s debut and bounced Tuivasa from the ranks of the unbeaten to close out 2018, this weekend presents “Cigano” with the opportunity to begin his year by toppling the first man to challenge Cormier for the heavyweight title as he takes on Lewis in Saturday night’s main event.

“As soon as they told me about the fight, I said yes immediately,” Dos Santos said when asked about the matchup with Lewis, which closes out the UFC’s debut appearance in “The Sunflower State” this weekend. “I don’t pick opponents; I’m here to fight against the best. I’ll do whatever it takes to get my chance to fight for the title again and get my chance to be fighting against the best guys in the world.

“Derrick Lewis just fought for the title and he’s a good opponent. He has a lot of power and it’s going to be a very interesting fight for the fans and for myself as well. I don’t underestimate my opponent — I know he’s dangerous — but I’m ready for him and I’m ready to win.”

Lewis presents a different kind of challenge than most heavyweights, as he brandishes true one-punch power and has shown he’s capable of snatching a victory from the jaws of defeat by landing a single blow at any point during the contest.

Prior to challenging Cormier for the heavyweight title in November, “The Black Beast” was 30 seconds away from landing on the wrong side of a unanimous decision loss to Alexander Volkov. Then the towering Russian dropped his hands a little too low in the waning seconds of the fight, giving Lewis the opening he needed to connect with a heat-seeking missile that sent Volkov crumpling to the canvas and propelled the cult favorite from Houston into a championship fight in New York City.

But the 35-year-old Dos Santos is well aware of Lewis’ approach and has already successfully navigated sharing the cage with punishing punchers looking to land a single fight-altering blow, having registered victories over vicious knockout artists like Shane Carwin and Mark Hunt in the past.

And while he sees similarities between those outings and this one, the resurgent veteran is forecasting a performance similar to the one he turned in against Tuivasa in Adelaide at the end of last year.

“I know Derrick is always looking for that one punch,” said Dos Santos. “I’m ready for that and I’m going to take advantage of every opportunity he gives me. I think the first round, I’m going to try to push him hard and I’m looking to finish him in the second round.”

If he can do it, the days of alternating wins and losses and fans wondering if he would ever return to title contention would be a distant memory.

Junior Dos Santos would be all the way back and things in the heavyweight division would be even more interesting as a result.