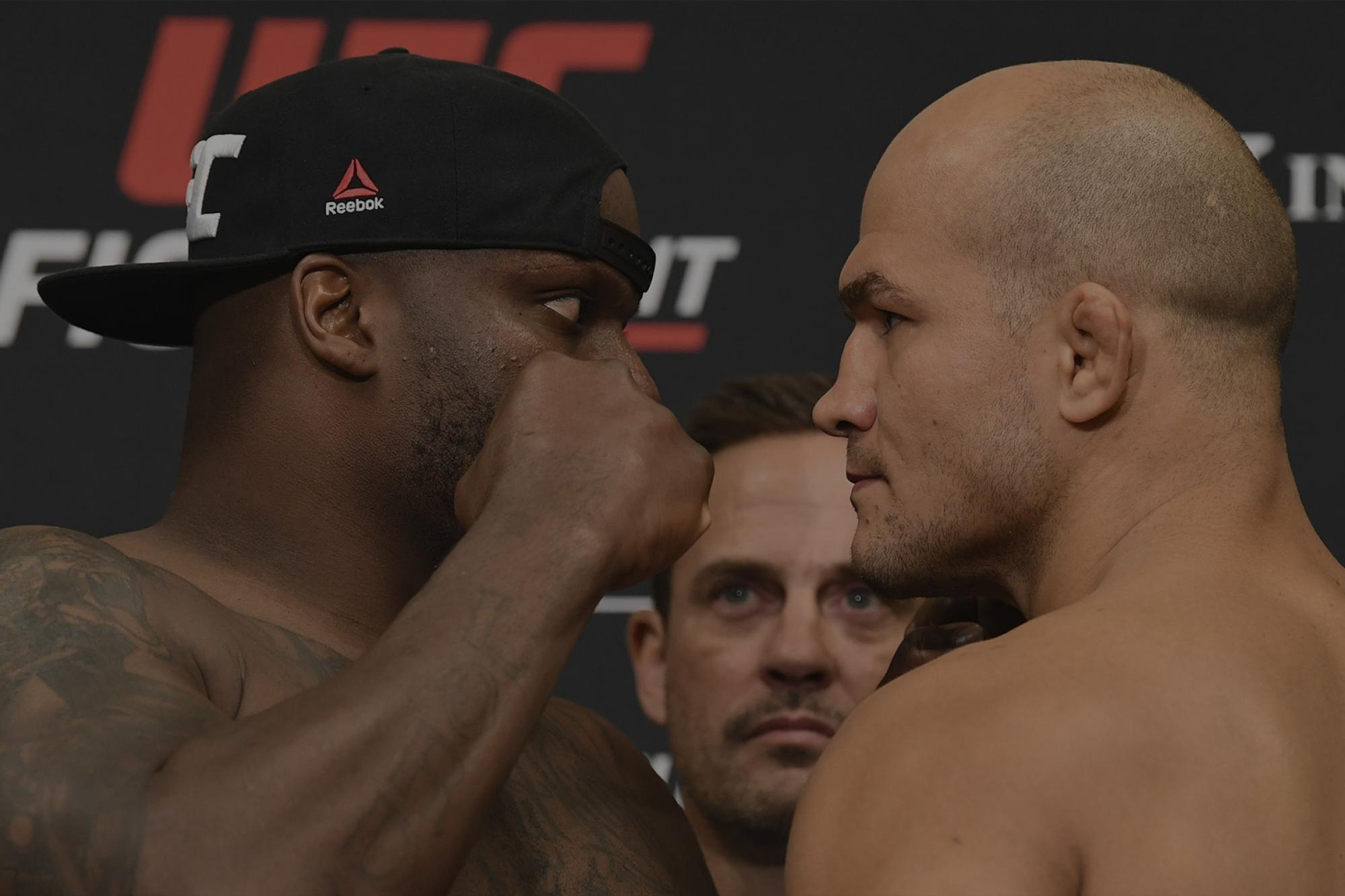 Lightweight vet Alex White snapped a two-fight losing streak in the opener, as he took a close, but unanimous, three-round decision over Dan Moret.

Moret (13-5) landed a hard left hand to open the bout and that opened up an opportunity to put his grappling game into gear against the fence. White (13-5) defended well for a while, but after a guillotine choke attempt came up short, Moret was able to get the Missouri product to the mat. There, Moret opened up a nasty cut on his foe’s forehead with an elbow, yet good work from the cutman between rounds kept the cut from being an issue for White.

The second was close, with Moret’s grappling countered by some hard strikes by White as the two exchanged down the stretch. In the third, both had their moments while grappling, but it was White’s two takedowns that may have allowed him to emerge with the victory via three scores of 29-28.

Social Post
Alex Morono def. Zak Ottow via TKO at 3:34 of Round 1

Zak Ottow wanted a bout with Alex Morono, but when the welterweights finally stepped into the Octagon Saturday night, it was all Morono, as “The Great White” won his second straight via first-round TKO.

Morono was on target from the start, and while Ottow was able to stay in there for a while, once Morono tagged him and forced a takedown attempt, the Texan opened up his arsenal, first a guillotine choke, then a series of thudding ground strikes that brought in referee Rob Hinds to stop the bout at 3:34 of the opening frame.

After an 0-2 start to his UFC career, Matt Schnell has now won three straight, and Saturday’s win was the most impressive, as he submitted Louis Smolka in the first round of their bantamweight bout.

Schnell took an early lead thanks to some sharp strikes, but when Smolka began finding a home for his own punches, the Louisianan took Smolka to the mat and then nearly sunk in a guillotine choke. Smolka escaped, but Schnell adjusted, going on to sink in the triangle choke that forced the Hawaiian to tap out at the 3:18 mark of round one.

With the win, Schnell moves to 13-4. Smolka, who saw a four-fight winning streak snapped, falls to 15-6.

Nearly a year after their first match in the LFA promotion, Maurice Greene evened the score with Jeff Hughes in the Octagon, taking a hard-fought three-round split decision win in a heavyweight bout.

Determined to not have a repeat of their first grappling-heavy bout, Greene kept Hughes in his striking range for much of the first round, not allowing the Ohio product to get into a rhythm on the feet.

The action heated up in round two, with both fighters getting in some solid shots that got each other’s attention, and while Greene’s jab was still the weapon of choice, when his defense got sloppy, Hughes took advantage, and “Lights Out” kept pressing in the third as his opponent tired, but apparently Greene put enough in the bank in the first two frames to take the decision.

Dawson controlled much of the first two rounds thanks to a series of takedowns, but in the closing stages of the second frame, the two began trading blows on the feet, and just before the horn sounded, Erosa tagged Dawson with several hard shots that set up a very interesting third round.

As the two went to the mat in the final frame, Dawson took Erosa’s back briefly before getting into the Las Vegan’s guard. Erosa’s lanky frame kept Dawson from getting his strikes off, but the 23-year-old kept pressing, nearly sinking in a rear naked choke before getting the opportunity to open up with punches up until the horn sounded.

Russia’s Yana Kunitskaya survived a late gut check to eke out a three-round unanimous decision win over Marion Reneau in a clash of bantamweight contenders.

Kunitskaya showed off her grappling in the opening round and it resulted in a winning frame for the Russian, despite a late charge from Reneau. In the second, Reneau began letting her hands go, and that was just fine with Kunitskaya, who fired back with a volume striking attack. In the third, Reneau kept walking Kunitskaya down, apparently breaking her nose with a hard strike early on. Kunitskaya wouldn’t yield, though, and when the scores were tallied, she emerged with the hard-fought win via identical scores of 29-28.

Anthony Rocco Martin made it four UFC wins in a row at 170 pounds, as he scored a shutout three-round unanimous decision over Sergio Moraes.

It took less than a minute for the two grappling specialists to hit the mat, with Moraes attempting a guillotine, but the action soon stalled, with referee Rob Hinds restarting the action with 2:24 left. There was no more mat action over the rest of the frame, but Martin did land some hard leg kicks before the horn sounded, and he kept the pace high in the second round as Moraes began to show signs of fatigue on the feet. In the third, it was more of the same, as Martin’s disciplined striking technique dominated the action offensively as he defensively avoided Moraes’ haymakers. The Brazilian did get a takedown in the closing minute of the fight, but it was too little too late.

Putting his often reckless attack on the backburner, Akhmedov fought a patient fight throughout the first two rounds, landing shots as Boetsch chased him while also controlling the grappling exchanges. In the second, a straight punch from Akhmedov seemingly broke Boetsch’s nose, adding to the woes of “The Barbarian.”

Told that he needed a finish to win, Boetsch continued to stalk Akhmedov in the final round, but Akhmedov continued to punish the Maine native, opening cuts on his face as he avoided any significant punches from Boetsch.

Social Post
Beneil Dariush def. Drew Dober via Submission (armbar) at 4:41 of Round 2

Beneil Dariush continued his move back into the lightweight rankings, submitting Drew Dober in the second round.

The pace was high throughout the first five minutes, but it was Dober clearly landing the harder shots when the exchanges heated up, jarring Dariush on a number of occasions.

Dariush suffered a flash knockdown early in round two, but as he rose, he had the opportunity to lock Dober up and take him down. Midway through the round, Dariush got into the mount, and while Dober was able to get loose, the Californian again took the position and then got Dober’s back. In Dariush’s transition to an armbar, though, Dober got the dominant position, but only briefly, as Dariush regained control and then got the armbar again. This time, Dober was forced to tap out at 4:41 of the second stanza.

Rothwell was in forward motion the entire first round, landing sporadic shots on his foe throughout the frame. Ivanov got in some hard blows of his own, though, making it an interesting round to score.

The bombs started flying late in the second round, with both fighters going back to their corners a little worse for wear – Rothwell bleeding from the nose and Ivanov having his eye swollen. And while the action remained competitive in the final frame, Rothwell’s strikes were more accurate as they increasingly hit the mark, and he even threw in a kick, elbow and knee as the final seconds ticked away, but it was not enough for “Big Ben” to get the decision.

Niko Price and Tim Means were expected to bring the heat in their welterweight bout, and they did just that, thrilling the fans in Wichita with plenty of heated exchanges until Price ended the bout via knockout late in the first round.

Means came out throwing, but Price adjusted well and jarred his foe with some punches and knees that forced the Albuquerque product into a takedown attempt. Means easily got the takedown and began dropping strikes on Price. Just before the midway point of the round, Price rose to his feet but ate some more hard shots on the way up. Means continued to land crisp combinations, and while Price got in some good shots, the harder blows were clearly being landed by Means, at least until Price drilled “The Dirty Bird” with a flush right hand that dropped him hard to the mat. A follow-up barrage of strikes ended matters seconds later, with referee Rob Hinds calling a stop to the bout at 4:50 of round one.

Brazil’s Elizeu Zaleski dos Santos scored his seventh finish in the UFC Wichita co-main event, submitting Curtis Millender in the first round and establishing himself as a serious threat to the welterweight elite in the process.

Even though dos Santos opened the fight throwing hard strikes, he then switched things up with a takedown in the first minute. Millender tried to scramble back to his feet, but in the process, the Brazilian took his back. Millender got out of trouble for a few moments, but “Capoeira” got his back again, and this time he sunk in the rear naked choke that produced a tap out at 2:35 of round one.

With the win, the No. 14-ranked Zaleski dos Santos moves to 21-5. Millender, who saw a nine-fight winning streak snapped, falls to 17-4.

The UFC’s first event in Kansas got a memorable main event on Saturday, with former world champion Junior Dos Santos stopping Derrick Lewis in the second round of a wild heavyweight battle to up his current winning streak to three at Intrust Bank Arena in Wichita.

Lewis was active with his kicks in the early going, and Dos Santos tried to answer every strike from his foe, but when he got over aggressive in the second minute, Lewis cracked him hard with a punch upstairs. The two proceeded to rock each other with right hands, igniting the crowd, but both recovered quickly. In the final minute, a spinning back kick to the body doubled Lewis over, but as “Cigano” rushed in, Lewis swung back with a haymaker, apparently playing possum. But as the action resumed, Lewis doubled over again, still hurt to the body.

After that wild first round, it was going to be interesting to see if Lewis would recover, and a few hard kicks from the Texan showed him to be back in business as the second began. But Dos Santos patiently waited for his opportunity to strike, and after hurting Lewis with a right hand, he went on the attack. Lewis fell to the mat under the barrage, and after some unanswered ground strikes, referee Herb Dean stepped in and stopped the fight at 1:58 of round two.