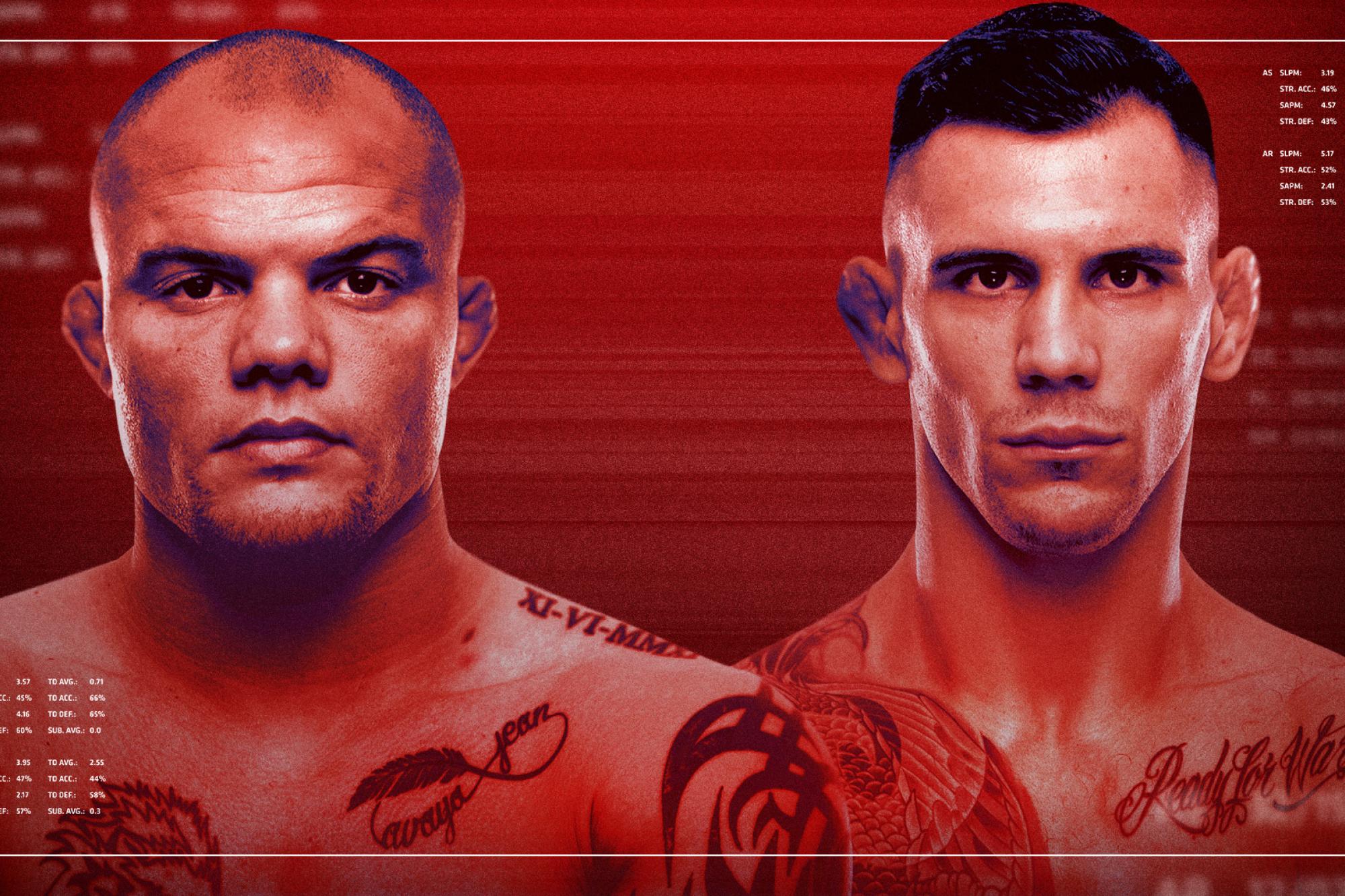 All The Big Winners From UFC Fight Night: Smith vs Rakic
By Thomas Gerbasi, on Twitter: @TGerbasi • Aug. 28, 2020

The last UFC event in August is set be headlined by an exciting bout featuring light heavyweight finishers looking to make a statement as No. 5 ranked Anthony Smith takes on No. 8 Aleksandar Rakic in a three-round main event. In the co-main event, former UFC welterweight champion and No. 13 ranked contender Robbie Lawler returns to action to battle fellow veteran and No. 14 ranked Neil Magny.

Mallory Martin survived a first-round knockdown to roar back and submit Hannah Cifers in the second round of their strawweight opener.

After the two got acclimated to the fight for the first half of the opening round, Cifers dropped Martin with a hard right hand and nearly stopped the fight with a barrage of shots both on the ground and the feet. Martin ultimately cleared her head and pulled guard, which ultimately bought her enough time to make it out of the round.

Martin got the action to the mat in the first minute of round two and her ground-and-pound attack bloodied Cifers before the Denver product took Cifers’ back and sunk in the rear naked choke that produced a tap out at 1:33 of the second stanza.

Strawweight prospect Polyana Viana was impressive in victory against Emily Whitmire, submitting the Las Vegan in the first round.

Whitmire dragged Viana to the mat in the opening minute of the fight, but the Brazilian stayed busy with strikes from the bottom, and in a flash she locked up her opponent’s arm and got the tap out via armbar at 1:53 of round one.

Welterweight up and comer Sean Brady moved to 13-0 as a pro in emphatic fashion with a second-round submission win over Christian Aguilera.

Both fighters were throwing hard and fast in the opening round, with each having their moments. But Brady’s short left hook was the most effective blow of the round, and he landed it several times before adding to his score total with a takedown with a little over a minute left.

Brady got to the bout early in round two and he almost immediately locked in a guillotine choke. Aguilera (14-7) fought hard to get loose, but it wasn’t meant to be, as the maneuver ended the bout at the 1:47 mark.

Featherweight veteran Alex Caceres secured the first three-fight winning streak of a UFC career that began in 2011, as he submitted late-notice replacement Austin Springer in the first round.

Caceres was sharp from the start, landing hard leg kicks on the Octagon newcomer. The Miami native was also patient, but when Springer shot for a takedown, he moved immediately into position, taking Springer’s back and sinking in a fight-ending rear naked choke. The official time of the tap out was 3:38 of round one.

Zak Cummings got back in the win column in middleweight action, as he scored a three-round unanimous decision over Alessio Di Chirico

For three rounds, the two 185-pound veterans traded turns in the lead, with Di Chirico making an effective run at the end of the first round that may have earned him the frame. Cummings was always neck and neck with the Italian, though, making each of the subsequent rounds tough to call. But at the end of the last round, a left head kick dropped and hurt Di Chirico, putting a stamp on the win for Cummings, now 24-7. De Chirico falls to 12-5.

Just 18 days after earning a UFC contract on Dana White’s Contender Series, unbeaten middleweight Impa Kasanganay was getting his hand raised in a UFC bout, as he defeated Maki Pitolo via three-round unanimous decision.

The exchanges were heated in the early going, but midway through the frame, Pitolo (13-7) began finding his range and getting the better of the action. Kasanganay (8-0) took the shots well, but he didn’t want to be eating too many of them. With a minute left, though, Kasanganay got back in business with hard punches that opened a cut over Pitolo’s left eye and raised a lump over his right eye.

Kasanganay began to pull away in the second as he outlanded Pitolo and punctuated matters with a thudding elbow off a clinch break, and while the pace dipped slightly in the third, the newcomer maintained his lead en route to the win via three scores of 30-27.

UFC rookie Bill Algeo made quite an impression in his Octagon debut, pushing longtime featherweight contender Ricardo Lamas to the limit before “The Bully” came out in the third round and won an exciting unanimous decision.

There was no shortage of action in a frantic first round, with Algeo showing no signs of the first-time UFC jitters while Lamas mixed up his striking attack effectively throughout the opening five minutes, with his kicking game working particularly well.

Algeo got off to a fast start to begin round two, but Lamas slowed him down with a takedown. Algeo scrambled back to his feet and resumed his busy striking attack, forcing the bloodied Lamas to look for another takedown. This time, Algeo was able to hold him off as they grappled against the fence, landing with several elbows at close range. Midway through the round, the two separated and Algeo rocked Lamas with a knee before getting his own takedown. Lamas reversed position and got back to his feet, locking his foe up in another clinch. Once separated, Lamas landed several good shots to finish the round strong.

Lamas got the takedown he was looking for in the second minute of round three, and each fighter landed hard strikes on the mat. Lamas kept the heat on, though, as Algeo tried to get back to his feet, and the punches kept coming. Algeo made it to his feet briefly with under two minutes left, but Lamas dragged him back to the mat and took his foe’s back, landing ferocious strikes until the final horn

Alexa Grasso’s first UFC bout as a flyweight was a successful one, as she delivered a hard-fought effort in winning a three-round unanimous decision over Ji Yeon Kim.

Using her slick boxing throughout all three rounds, Grasso’s stick and move attack paid dividends throughout as she tagged Kim and got out of range before any of Kim’s hard counters could do significant damage. The South Korean got in her shots over the 15-minute bout, but Grasso’s speed and gameplan, along with a late takedown, was the story of the fight.

In the UFC Fight Night co-main event, welterweight contender Neil Magny turned in one of the most impressive performances of his career as he decisioned former world champion Robbie Lawler over three rounds.

Magny’s game plan was clear as the bout began, as he looked to keep Lawler at long range, but the Coloradan had no problem controlling the action at close quarters, either, as he dominated the grappling exchanges until Lawler found some daylight with under two minutes left. Lawler’s success was short-lived, though, as Magny put Lawler on the mat with a little over a minute to go and kept him there until the horn.

The second was another frustrating frame for Lawler, who was controlled on the mat for much of the frame. In the third, Lawler came out looking to turn things around, but outside of a hard right hand that landed, it was all Magny, who kept Lawler at bay with jabs, kicks and the occasional knee.

It was an important victory for Aleksandar Rakic in the UFC Fight Night main event, as he shut out fellow light heavyweight contender Anthony Smith over three rounds at the Apex in Las Vegas.

Rakic and Smith traded thudding kicks to the leg to start the fight, Rakic getting the better of the exchanges, as a leg kick put Smith down in the second minute. Smith looked to be in serious trouble, but he was able to scramble his way out of trouble briefly until Rakic resumed control on the mat again, keeping his foe there until the end of the round.

Rakic went back to his kicking game to start round two, but Smith went all-in on making it a close-range bout. He got his wish thanks to a big right hand upstairs, but Rakic pushed Smith to the mat and got back into the top position. Again, Rakic kept the fight grounded for the rest of the frame as he wrapped up another round on the scorecards.

Smith took some hard shots to begin round three, and while he took them, he wound up on his back with Rakic on top once more, a bad place to be in after losing the first two rounds. There, Rakic did enough to keep the position while nullifying any thoughts of offense by Smith.