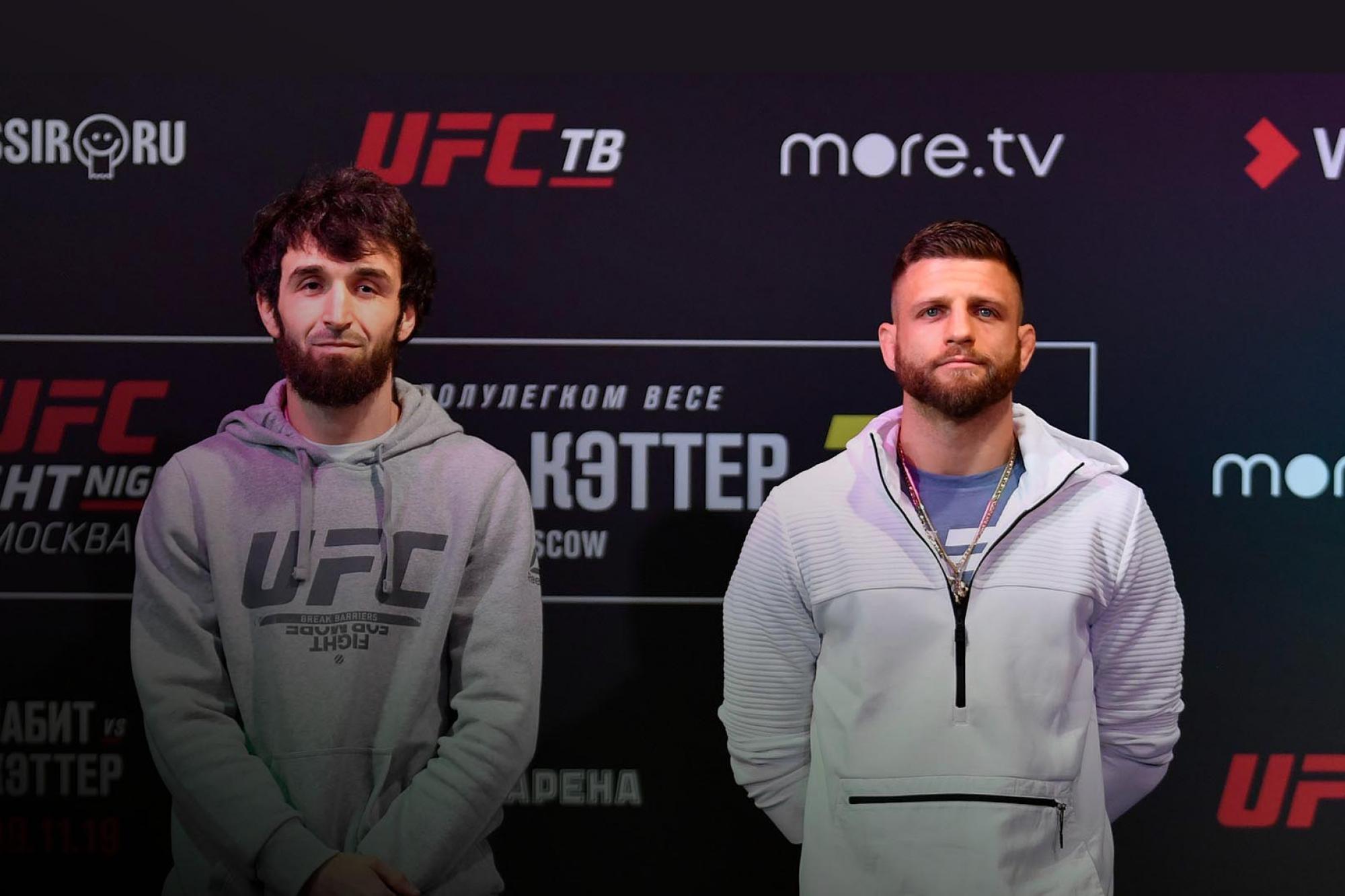 All The Big Winners From UFC Moscow
By Thomas Gerbasi, on Twitter: @TGerbasi • Nov. 8, 2019

Watch All The Action On ESPN+ | Fight by Fight Preview

Grant had a solid first round, landing several kicks before a spell of ground control. Popov was ultimately able to scramble out of trouble, land some ground strikes and get back to his feet with a minute left, but the frame belonged to Grant.

It was more of the same in round two, though Popov did threaten with a kimura and an armbar before Grant regained control late. The Russian did have his best round in the final stanza, but it was too little too late, as Grant took the nod via scores of 29-28 twice and 28-29.

Watch All The Action On ESPN+

Pannie Kianzad made it two for two over Jessica-Rose Clark, as she decisioned the Aussie in their bantamweight rematch.

Kianzad’s striking attack was technical and disciplined, and she calmly took control of the fight over the first two rounds. Clark wasn’t far behind, even landing a couple hard elbows while opening up a cut over Kianzad’s eye. But Kianzad remained a step ahead in the third and final round, and that’s all she needed to wrap up the shutout victory.

Roberts controlled the majority of the opening round by feeding Yakovlev a steady diet of strikes, and though the Russian was able to slow “The Predator” down for a spell with his clinch work, it was more defensive than offensive in nature.

Yakovlev opened the second with a takedown and did some good work on the mat, but Roberts responded with an armbar from his back. Yakovlev got free, and though Roberts soon rose to his back, “Russian Thunder” kept him locked up against the fence until they broke apart with 42 seconds left.

The fight went to the mat early in round three with Roberts in control on top until a return to the feet, and on the feet, it was the Californian landing well, but Yakovlev also finding some success on his way to a takedown with two minutes remaining.  The two didn’t stay grounded for long but went back to the mat in the final minute, with Roberts holding the advantage until the horn ended the bout.

Germany’s David Zawada scored the first upset of the night in the welterweight division, as he submitted highly-touted debutant Abubakar Nurmagomedov in the first round.

Nurmagomedov got a takedown a minute into the fight and it was time to work for the cousin of UFC lightweight champion Khabib Nurmagomedov. Zawada stated calm under pressure, though, locking in a triangle choke that forced the newcomer to tap out at 2:50 of the first round.

Middleweight prospect Karl Roberson shook off an inadvertent late-fight eye poke to roar back and submit UFC newcomer Roman Kopylov in the third round.

After a first round edged by the more active Roberson, the New Jersey native elevated his work rate even more in the second, drilling Kopylov with several kicks to the leg that were doing damage to the newcomer. Kopylov opened the final frame with a stiff 1-2 that got Roberson’s attention and ignited the crowd, but after some more solid attacks by the Russian, his momentum ground to a halt midway through the round when an eye poke cost him a point. When the action resumed, Kopylov went on the attack, but Roberson responded and then went on to score a takedown. Moments later, Roberson sunk in a rear naked choke, forcing Kopylov to tap out at the 4:01 mark of round three.

A clash of Russian welterweights went to Rustam Khabilov, who made his UFC debut at 170 pounds a successful one as he decisioned Sergey Khandozhko over three rounds.

While not the most compelling first round, it was Khabilov appearing to take it due to his continued attempts to implement his grappling attack. And by round two, that attack was in full swing thanks to a pair of takedowns, and he kept the pressure on in the final frame, dominating on the ground to secure the clear-cut win.

Social Post
Magomed Ankalaev def Dalcha Lungiambula by KO at :29 in Round 3

Light heavyweight prospect Magomed Ankalaev made it three wins in a row in prelim action, knocking out South Africa’s Dalcha Lungiambula in the third round.

Ankalaev pressured his foe from the start, consistently trying to land a kick to the head. Lungiambula stayed out of trouble, ultimately putting Ankalaev on his heels with a punch upstairs. Ankalaev shook off the blow and went back on the offensive, pinning Lungiambula against the fence in the late stages of the round.

Using his ground game to nullify the power punching of Lungiambula, Ankalaev worked to gain control on the mat in round two, and once settled in, he unleashed a series of thudding strikes that bloodied his opponent.

Told that he needed a finish, Lungiambula came out fast for round three, but Ankalaev responded with a front kick to the face followed by a right hand that immediately brought in referee Marc Goddard to stop the fight 29 seconds into the final frame.

Light heavyweights Shamil Gamzatov and Klidson Abreu kept it standing for three rounds in their bout, with Gamzatov remaining unbeaten in his UFC debut via split decision.

The first two rounds were close and competitive, with Abreu appearing to edge them slightly despite there not being any significant spurts of action from either side. Gamzatov rallied in the third, and it was enough for him to edge out the decision and get his first Octagon victory.

After some solid standup from both combatants to start the fight, Martin nearly pulled off a kimura when the bout went to the mat in the second minute, only to see Emeev calmly escape and get back to his feet, where he bloodied Martin’s nose with a stiff jab.

A little over a minute into the second stanza, Martin attempted a guillotine choke, but it was not to be, as Emeev got free and bulled his foe to the fence before standing. While on the feet, Martin continued to drill Emeev’s calf with kicks, leaving the Russian’s leg swollen.

Emeev and Martin each had their moments in the final frame, but in the end, Martin had done enough to pull off the victory and get back in the win column. It was an important one for Martin, who dedicated the bout to his mother, who was recently diagnosed with breast cancer.

Ed Herman showed that there is still life in the Octagon for him at 39, as he scored a three-round unanimous decision win over Khadis Ibragimov in a light heavyweight bout.

Not surprisingly, Ibragimov was all about throwing bombs in the first round, and while he landed some, Herman took them well and did excellent work on the inside, bloodying Ibragimov’s nose with a knee while also landing short elbows.

Ibragimov tagged Herman with some hard shots in round two, only to be met with a dismissive tap on the chin by “Short Fuse,” who got right back into the fray, controlling matters at close range. And in the third, there was more punishment being dished out by the veteran, who drilled Ibragimov with knees. The Russian was game to the end, though, and he made his final surge behind a takedown with under two minutes to go, but it was not to be for Ibragimov, who was a late replacement for Gadzhimurad Antigulov.

Social Post
Danny Roberts def Zelim Imadaev by KO at 4:54 in Round 2.

Welterweight veteran Danny Roberts snapped his two-fight losing streak in emphatic fashion, knocking out Zelim Imadaev in the second round.

The veteran Roberts mixed his attacks up well in the opening round, adding two takedowns to his usually solid standup game. This allowed him to put some points on the scorecard while Imadaev attempted to end the bout with his fists and feet.

Roberts got a takedown to begin the second frame, but Imadaev adjusted and took the top position as they hit the mat. The two rose quickly and both had some solid moments on the feet before locking up again. With under two minutes left, it was Imadaev scoring a takedown, but the fighters were upright seconds later. And after some good inside work by Roberts, he ended the bout in emphatic fashion with a flush left hand that spun Imadaev and sent him face first to the canvas. The official time of referee Rich Mitchell’s stoppage was 4:54 of round two.

Former NFL star Greg Hardy proved that he could hang with an elite heavyweight on Saturday, but it was still Alexander Volkov who emerged victorious in the UFC Moscow co-main event, as he beat the late replacement via unanimous decision.

The fighters traded shots at range in the opening stages of the fight, Volkov’s jab being the most telling blow. Hardy held his own before coming up short on a takedown attempt, and then it was back to kickboxing for the two. Hardy landed a pair of left hooks in the closing minute of the first, but Volkov took them well and kept control of the fight.

Between rounds, Hardy told his corner his right hand was injured, but he still attempted to throw it in the second stanza. Volkov remained patient in his attack, though, and his technique was sharp, even though he was still wary of Hardy’s power. Volkov did pick up the pace slightly in the final minute, ending the round strong, and in the third, he went back to a measured attack that kept Hardy from getting into an offensive rhythm and that carried him to victory.

Featherweight contenders Zabit Magomedsharipov and Calvin Kattar delivered as expected in their UFC Moscow main event at CSKA Arena, but it was Magomedsharipov who left with the victory, holding off a late charge from Kattar to win a three-round unanimous decision.

Magomedsharipov fought brilliantly in the opening five minutes, switching up his striking attacks with relative ease as he kept Kattar at the end of his strikes. When the distance closed, the New Englander was able to get his shots off effectively, but there weren’t enough of those sequences for Kattar.

The high-level action continued in the second round, with the crowd going wild for every offensive move from Magomedsharipov, and there were plenty of them. And though Kattar had his moments, like the first round, there weren’t enough for him to turn the momentum.

The Methuen battler aimed to change that in the final frame, and he began landing more shots, putting Magomedsharipov on the defensive. In the final minute, the Dagestan product scored a takedown to stop his foe’s charge, but Kattar kept throwing from his back, wrapping up a solid round.

Once a co-main event, Magomedsharipov-Kattar was moved up to the headlining spot and kept at three rounds after Junior Dos Santos was forced out of the original UFC Moscow main event against Alexander Volkov.