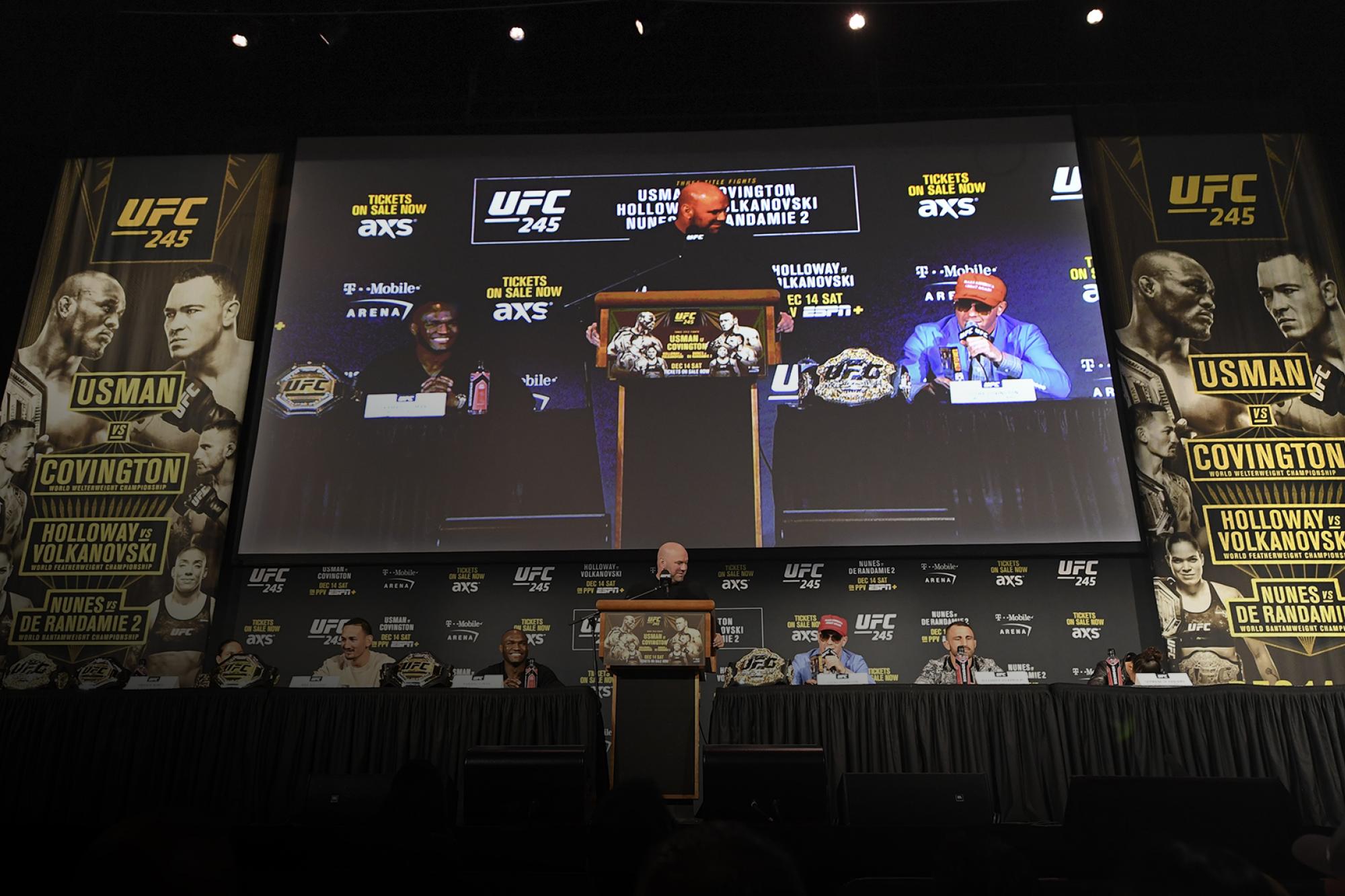 Friday evening in New York City, three sets of champions and challengers made their way onto the stage inside The Hulu Theater at Madison Square Garden to promote next month’s colossal UFC 245 pay-per-view.

On December 14 at T-Mobile Arena in Las Vegas, each of the three tandems will step into the Octagon with championship gold hanging in the balance, and all three fights promise to be competitive affairs between titleholders and the top challengers in their respective divisions, but on Friday evening in New York City, one bout took center stage.

While women’s double champ Amanda Nunes and featherweight champion Max Holloway exchanged brief pleasantries with the opponents they’ll face next month, Germaine de Randamie and Alex Volkanovski, respectively, the combatants in the evening’s main event for the UFC welterweight title used their time to stoke the fires of a rivalry that has been smoldering for a number of months now. 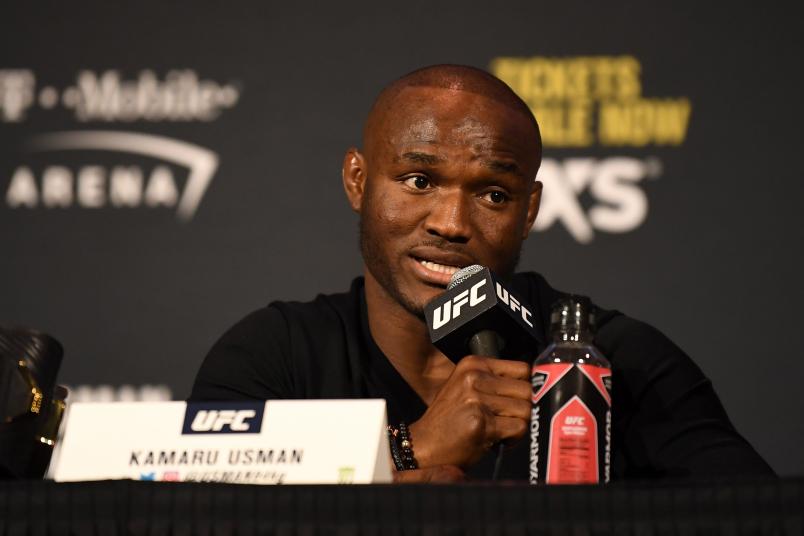 “Everybody knows this is my second title defense,” said Covington, the former interim champion who brought his own UFC title belt to the festivities. “My last title defense was against the most dangerous guy in the division, Robbie Lawler, and you saw what I did on his face. I landed a strike record on his face and that’s a guy I liked. Wait until you see what I do to this clown.

“The only reason he’s relevant is because he attaches his name to mine and December 14, only on pay-per-view, I’m detaching this clown from my coattails.”

“All I’m waiting for is December 14, when you guys finally get the fight that you’ve been waiting for for so long,” Usman said when asked about Covington’s antics.

Competitively, it’s a tremendously compelling fight, as both champion and challenger deploy a pressure-based attack with relentless grappling as their foundation and reached this point by facing and defeating two of the same opponents, Demian Maia and Rafael Dos Anjos.

Covington faced each man first, registering unanimous decision victories in both cases, while Usman shared the cage with them soon after, posting similar results. It’s one of the interesting wrinkles in this matchup and a frequent talking point for the verbose challenger.

“I beat everybody that he beat, but I beat them before he beat them,” said Covington. “He had to come pick up the carcasses, the dead bodies that I left.

“He’s not impressive, he sucks at fighting and December 14, I’m going to expose him.”

“Everybody always says they have a chance, but what fight have I been in in the UFC that was competitive?” he asked rhetorically. “Bottom line is everybody thought my last fight (against Tyron Woodley) was going to be competitive.”

For the record, Usman swept the scorecards at UFC 235, dominating Woodley en route to claiming the welterweight title.

While Covington got his shots off and Usman offered the occasional counter, the remaining sets of competitors slated to face off on Saturday, December 14 in T-Mobile Arena kept things pretty basic.

Featherweight challenger Alexander Volkanovski, who has gone 7-0 inside the Octagon and carries a 17-fight winning streak into the UFC 245 co-main event, was quick to pay his respects to Holloway before volunteering to help him make the full-time move to lightweight.

“Fighting someone like Max Holloway, it’s nothing but respect — he’s a great champion — but I’ve got to do my thing,” said the former rugby standout, who defeated Jose Aldo in May to secure his championship opportunity. “December 14, I think ‘The Blessed Era’ ends. It’s my time.

“I know obviously that he’s a big boy, I’m a nice guy right, so I can see he cuts a lot of weight and I’ll make the decision easier for him by taking the belt and let him move up.” 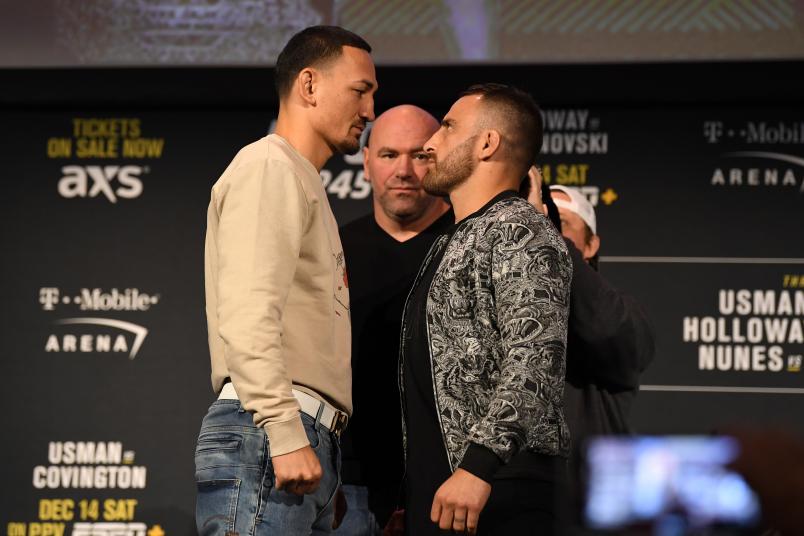 Asked where Volkanovski ranks in the collection of challengers he’s faced since ascending to the featherweight throne, the Hawaiian champion stayed on brand with his response.

“That’s not my job to do the rankings,” Holloway said. “He’s the No. 1 contender. He’s the next cupcake on the list and I can’t wait to taste the flavor.”

The vibe was similar between Nunes and de Randamie, who will kick off the tetra-pack of title fights slated to close out the final pay-per-view of 2019 in Las Vegas.

Both women referenced their fight from November 2013, citing the improvements they’ve each made since then, with the challenger explaining why she wanted this fight to take place at bantamweight and the champion promising to continue proving her dominance on December 14. 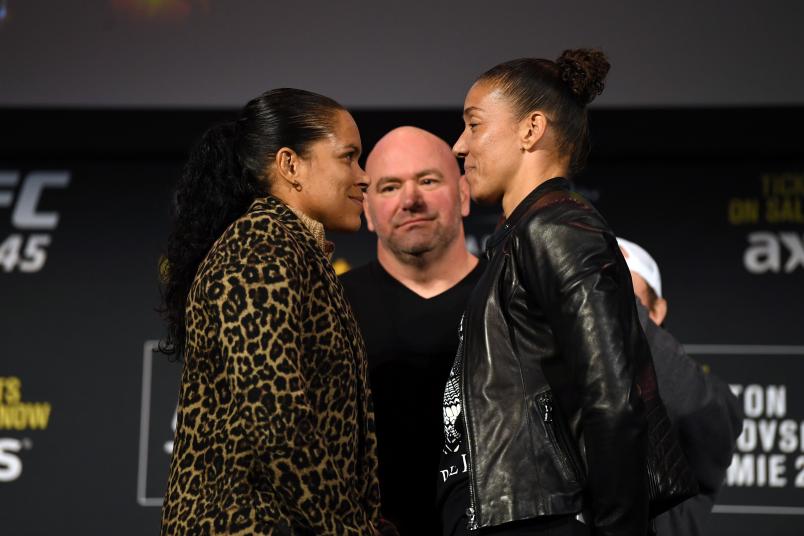 “She’s right — I declined to fight at 145,” de Randamie said after Nunes explained her preference was to defend her featherweight title. “I was the 145-pound champion. No one defeated me to take that belt…I want the belt at 135 — it’s the most active weight division.

“I just want to fight the very best,” she added. “I have the utmost respect for Amanda and I believe she is the very best at this moment and I will bring it to her.”

“I feel like she deserves it,” Nunes said of the Dutch veteran, who enters on a five-fight winning streak. “She just beat the No. 1 contender. She’s the next one.

“I respect her a lot, she’s evolved a lot, but we fought when I was beginning my career in the UFC. Now I’m the double champion and there is a lot of experience that comes with that and I will bring this belt home with me; there’s not a doubt in my mind.

“I’m here to make statements, make history, and keep putting my name at the top of the mountain,” Nunes added. “I’m here to stay and I will prove it once again.”

Save the date and get your popcorn ready because UFC 245 is going to be something special.