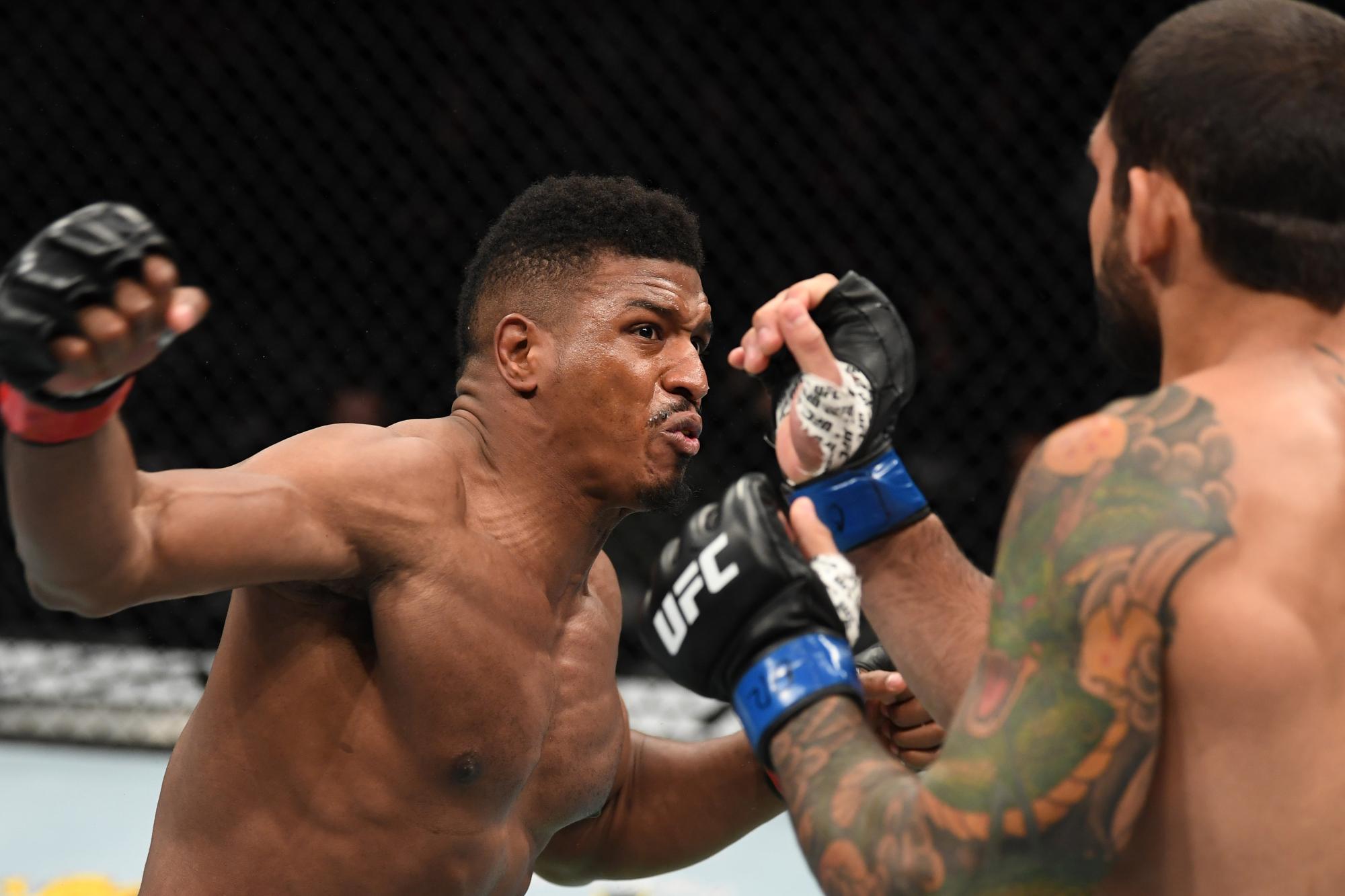 Menifield Knows Anything Is Possible

“It shows them that with perseverance, anything is possible,” Menifield said of his journey. “As I climb and get further in the MMA world, I can show them and they’ll be able to see what it means to keep going no matter what.”
By E. Spencer Kyte • Jun. 25, 2019

Alonzo Menifield’s rise to the UFC is a story of perseverance, one that started long before he became an intriguing addition to the organization’s light heavyweight ranks.

The Fortis MMA product was without both his parents at a young age ¬— his biological father was never really in the picture and died in 2002, while his mother disappeared into drug addiction when he was 11, resulting in Menifield and his older brother being entered into the foster care system in California.

Things don’t often work out for kids in such a dire situation, but rather than let the sadness, loneliness and anger that filled him become the guiding factor in his life, Menifield and his brother made their way through the system until they met Godwin Ezenwa, the man who eventually took them in, adopted them and became their father.

Professionally, Menifield eventually matriculated to MMA after falling out of love with football.

An outstanding athlete with obvious power and potential, he was one of several members of the Fortis MMA team to make their way onto the first season of Dana White’s Contender Series, where he earned a stoppage win over Daniel Jolly when the UFC veteran was unable to continue following the first round. 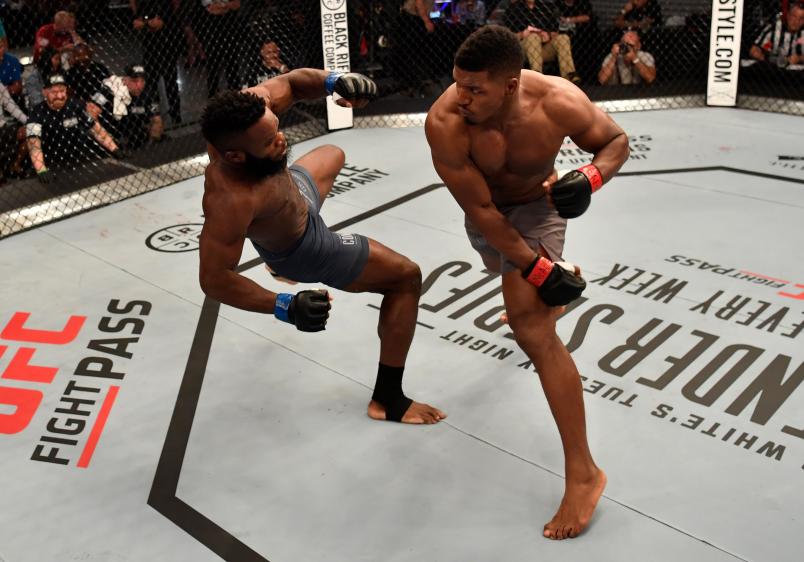 Despite his clear upside and the constant need for an injection of fresh talent into the 205-pound weight class, Menifield was not awarded a contract and instead had to return to the regional circuit in order to continue sharpening his skills and honing his craft.

“When I was in the Contender Series the first time and it ended the way it ended, I felt like it was a plan and it is what it is,” said Menifield, who squares off with Paul Craig at Target Center on Saturday. “As crazy as it may seem, I was ready to just keep going and going because there is a lot worse than just trying to keep fighting.”

After dispatching Jolly and getting sent back to the regional ranks, Menifield earned a pair of stoppage wins under the LFA banner before returning to Las Vegas to take on Dashawn Boatwright in the final bout on the first week of Season 2 of the Contender Series.

“When I got that second opportunity, I was like, ‘this is it; I’m going to hit this guy as hard as I can and get him out of there’ because I feel like this MMA thing is something I’m supposed to be doing.”

Eight seconds after the fight started, Menifield had earned a UFC contract, as he smashed Boatwright with a straight right hand as he offered a high kick to start the fight. Chasing him to the canvas, Menifield unleashed a torrent of blows that forced referee Mark Smith to step in and stop the bout, leaving UFC President Dana White little choice but to bring him into the fold.

A big part of what contributed to his “just keep going” mindset between his twin Contender Series appearances is the makeup of the training room at Fortis MMA.

The Dallas gym features a number of fighters who have worked their way up the regional ladder under the guidance of head coach Sayif Saud, graduating from smaller shows to LFA and into the UFC, with many getting their opportunity via the Contender Series, including fellow light heavyweights Ryan Spann and Kennedy Nzechukwu, who both also needed two kicks at the can in order to secure a UFC contract.

“Seeing the group of guys like Kennedy and Ryan — and we had “Ocho” (Steve Peterson) and Charles (Byrd) — and all of us being in that training room grinding, trying to be at the highest level was very impactful and inspirational,” explained Menifield. “It tells me not to have any excuses, even if I felt mopey about my situation.

“You look at these guys and they’re here every day, they drive hours and hours, make tons of sacrifices and they show up no matter what issues they have and they train and train and train. That allows me to keep going and work towards that common goal of fighting in the UFC.”

After working alongside a number of teammates in pursuit of their shared goal of reaching the UFC, Menifield also got to make his promotional debut alongside one of his training partners, debuting in January against Vinicius Moreira three fights after Geoff Neal collected his third win in as many starts by outworking and outlasting Belal Muhammad.

His biggest takeaway from his first UFC fight week experience?

“I learned to get a haircut before I fly in,” laughed Menifield, who put away Moreira in a shade under four minutes to push his record to 8-0 and establish himself as one to watch in the light heavyweight division. “I was thinking like LFA-style where I go in, weigh in and then do media, but it was media from Wednesday all the way until fight day, so I’ve learned to get a haircut before I leave.

“The fight part was therapeutic,” he added. “You go out there and it’s just you and this other guy, and in the back of my mind, it’s like, ‘I’ve trained, I’ve done a lot, spent so much time and energy grinding and training to get to this point’ and then you finally get to just lay it all out.

“My mindset is always to just leave the cage an empty vessel — I’m trying to pour it all out.” 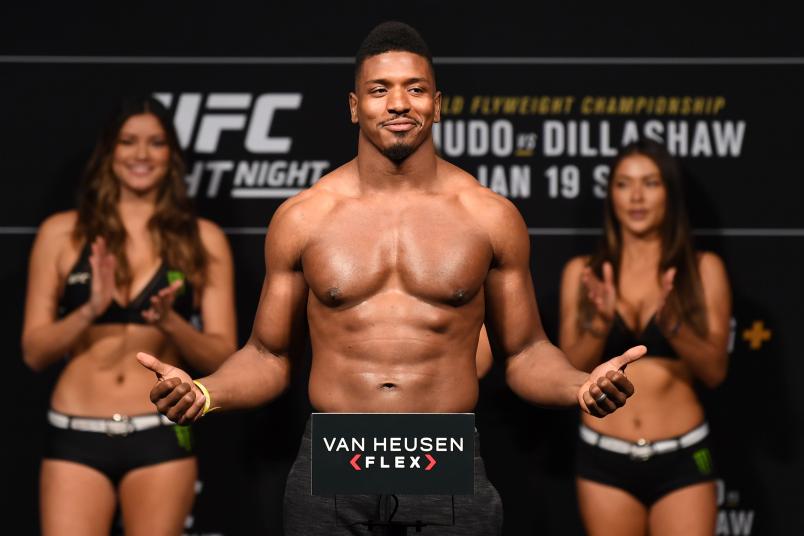 This weekend in Minnesota, Menifield looks to maintain his unbeaten record when he squares off with Craig, a fighter he’s long envisioned facing and one his team has already prepared for in the past.

“The crazy thing about it is that before everything, I was like, ‘Yeah, I’d fight Paul Craig,’” said Menifield. “I had him on a list that I created (of guys I would fight), so to get the call, I was like, ‘That’s cool.’ I put it in the air years ago and now here it is, so that’s a blessing.”

The most experienced opponent he’s faced to date, the 31-year-old Scotsman is 3-3 in the UFC, 11-3 overall, and enters Saturday’s main card opener off a third-round submission win over Menifield’s teammate Kennedy Nzechukwu back in March.

Much like his victory over Magomed Ankalaev last year in London, the submission specialist never stopped hunting for openings and when the still green Nzechukwu failed to extricate his arms from inside Craig’s guard, “Bearjew” threw up his legs, locked up a triangle and secured the tap.

“Paul Craig is persistent in trying to grab onto you and take you down — that’s what Kennedy would show me in sparring sessions is that he grabs and grabs,” said Menifield when asked what he could glean from his teammate’s experience in the cage with his opponent this weekend. “I don’t know if he was ever too strong for Kennedy, but he’s persistent in trying to grab you and take you to the ground because that’s his game plan and he’s going to follow his game plan.

“I’m super-excited about this fight and I’m ready to get out there, fight this guy and try to stop him.”

From a challenging childhood and foster care to having to go back to the regional ranks and continue to improve before getting the opportunity to compete on the UFC stage, everything about Menifield’s life has been a testament to his persistence and drive.

It’s a lesson the rising star is happy to get to share with his two sons, Alonzo and Zavier.

“It shows them that with perseverance, anything is possible,” Menifield said of his journey. “As I climb and get further in the MMA world, I can show them and they’ll be able to see what it means to keep going no matter what.”