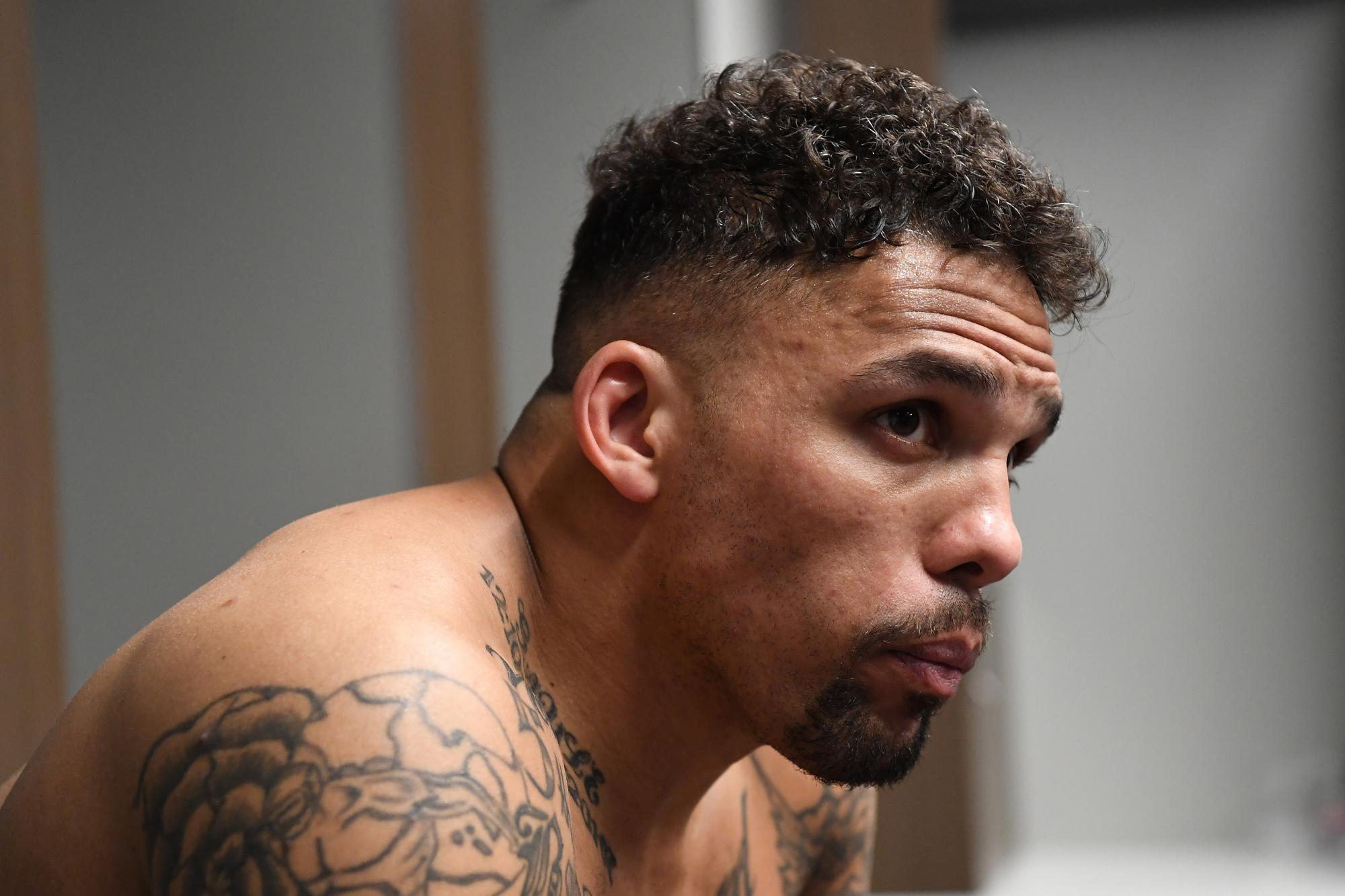 Despite his recent three-fight losing skid, Eryk Anders believes he's better than his record shows and is ready to flash his potential once again.
By Thomas Gerbasi • Jun. 28, 2019

For most it would have been a quick getaway in the middle of camp, an opportunity to clear the head before getting back to training. Eryk Anders doesn’t operate like that, though. For him, every day is training day, so while in Southern California earlier this month for a fit expo, he decided to drop into Freddie Roach’s Wild Card Gym for some work.

“It was good,” Anders said. “I got a little mitt session in. Anytime I travel somewhere, I try to get new looks or a different perspective, and I try to pick something up. So what better place to train hands than at the Wild Card.”

What better place indeed, especially with Roach preparing Manny Pacquiao for his next bout in July. Yet despite the pulls on his time, the renowned trainer took time to work with Anders and trade stories with him.

“I’m definitely a fan of the sport and I appreciate the things that Freddie Roach has done for the sport,” said Anders. “But the thing that really took me back was how much he talked to me. We were talking about MMA and some of the guys that he had trained and who had been in and out of the gym. And I was shocked that a dude of his status was just sitting there talking to me.”

Anders shouldn’t be shocked. A) Roach is one of the good guys in combat sports. And B) Anders is one of the top prospects in the game, even though he enters Saturday’s bout with Vinicius Moreira on a three-fight losing streak. It’s almost hard to fathom that, given the start Anders had to his UFC career, one in which he won three of his first four bouts, with the only loss a controversial split decision to Lyoto Machida. But here he is, and he’s wondering the same thing everyone else is.

“Every day it crosses my mind,” Anders said. “But I’m still putting the pieces together. I’ve been in the UFC the majority of my career and this will be my eighth fight in two years, so I’m pretty active. Some of the guys I’ve lost to, one of them (Thiago Santos) is fighting for the belt. I don’t do moral victories, but it is what it is. There’s gotta be a winner, there’s gotta be a loser and I try to be on the winning side of things.”

Even in his recent defeats, his Fight of the Night with future title challenger Santos was accepted on short notice, and his split decision loss to Elias Theodorou could have gone in his favor. And while there was no doubt in the April defeat to Khalil Rountree Jr., Anders took some shots throughout the 15-minute battle and kept marching forward. Again, no moral victory, but he did take some lessons from the bout, one of which was that while this weekend’s fight is at 205 pounds, he sees middleweight as the division where he will ultimately make his run for a belt.

“For my career, I think middleweight is the way to go,” Anders said. “After fighting Rountree, it seems like I’m gonna be at a speed disadvantage, regardless of the weight class. So if that’s gonna be the case, then I’d rather at least be the bigger, stronger guy and have something in my favor going into the fight. If everything else is equal, what attribute do I have that’s going to help me win the fight? Rountree was much faster than I anticipated, and he was way bigger. So that kind of took everything away.”

As for his ability to take a lickin’ and keep on tickin’, he says, “I think I can hang with anybody in any of these divisions. But I don’t want to rely on my chin. I feel like your chin is like a pitcher’s arm; after a certain amount, it can’t take it no more. I’d rather not rely on it as a part of getting ready for a fight. I’ve taken very little damage at middleweight, and especially if I want to fight for a long time, then middleweight’s the way for me to go.” 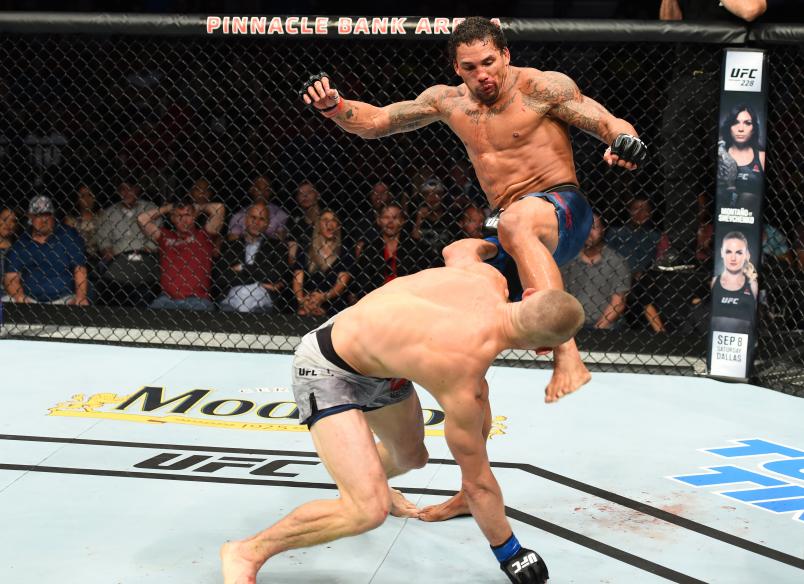 LINCOLN, NE - AUGUST 25: (R-L) Eryk Anders knocks out Tim Williams with a kick in their middleweight fight during the UFC Fight Night event at Pinnacle Bank Arena on August 25, 2018 in Lincoln, Nebraska. (Photo by Josh Hedges/Zuffa LLC/Zuffa LLC via Getty

Maia Fighting For Something Bigger | Benavidez Signature Moves | Menifield Knows Anything Is Possible | Free Fight: Ngannou vs Overeem | Fight by Fight Preview | A Good Time To Be Maurice Greene | Fights To Watch Before UFC Minnesota |

But first there’s some business to take care of at light heavyweight against Brazil’s Moreira, a Contender Series alumnus seeking his first Octagon win. Anders has no intention of letting him get it.

“I show up and I put on exciting fights, which I think is why I’m still around on my three-fight skid,” he said. “It’s not the best record, but I think the way that I fight, two main events and two performance bonuses in seven fights is a lot more than a lot of guys see, so I may be upside down in my record but, at the same time, the quality of fights is there and it’s not like I’m losing to slouches. The outcome of some of these fights hasn’t been exactly what I wanted, but if I can be myself, then I’m gonna be myself. I don’t want to be that guy who picks and chooses his opponents and says no. Part of the reason I’m still around after those three fights is because I say yes. ‘Hey, you want to fight Thiago on six days’ notice?’ ‘Okay, let’s do it.’ There’s never any hesitation, I really enjoy what I do. I love fighting and I’m getting better every day. I wouldn’t change anything. Me being me, and that being who I am, is what fans want to see. And I think they agree that I have a lot of potential and I’m a lot better than my record shows.”