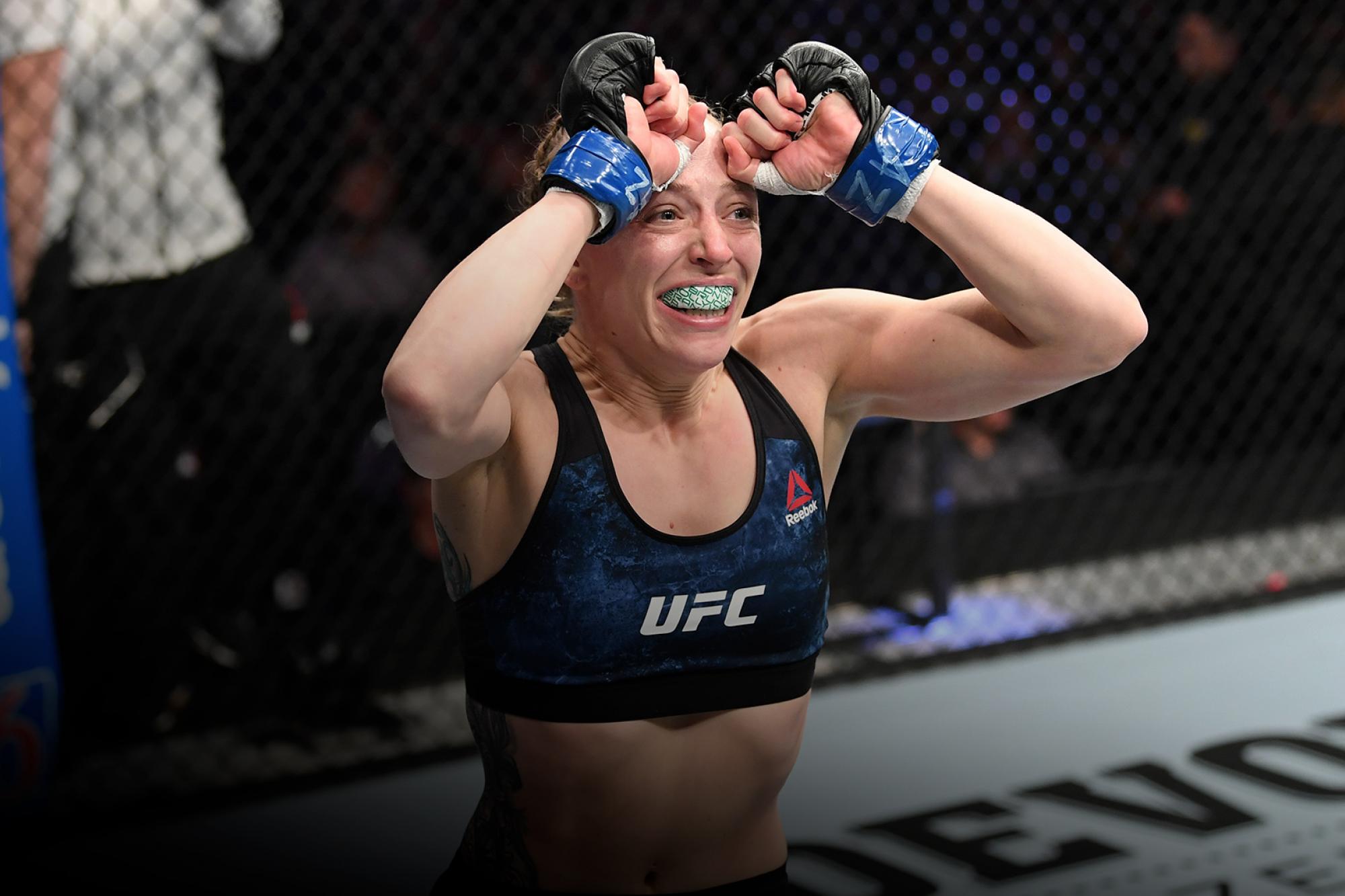 Emily Whitmire Wants To Show Off Her True Skills

A change of scenery has Emily Whitmire feeling strong ahead of her August 29 bout.
By Zac Pacleb, on Twitter @ZacPacleb • Aug. 25, 2020

Emily Whitmire felt like she was in a bad dream.

With Amanda Ribas hounding her around the Octagon in Minneapolis, Whitmire couldn’t find her flow, eventually tapping out to a rear-naked choke in the second round.

“I was not in that cage that day,” Whitmire told UFC.com. “Even if I would’ve still lost, Amanda is super talented, and I think she will be champion at some point, but I didn’t fight good. It’s hard to get over a loss when you know you fought like s***. I felt like I didn’t even show what I had been working on in that fight.”

Heading into that bout, Whitmire admitted she had a “horrible” training camp in which she felt she lost every round during sparring, making her feel like she had essentially “trained to lose.”

The Las Vegas-based Oregonian was excited to show what she could really do against Polyana Viana at UFC 248 in March, but two weeks before the bout, Whitmire said she received an email citing medical concerns. Tests followed, discovering an elevated white blood cell count, and rest was ordered for Whitmire. Not an ideal moment for that but, eventually, Whitmire got clearance to go through with the fight. Whitmire felt cautious about going through with it, but coming off a loss, she didn’t want to give up a chance to bounce back on a big pay-per-view in Las Vegas. Cutting weight was the last thing on her mind. 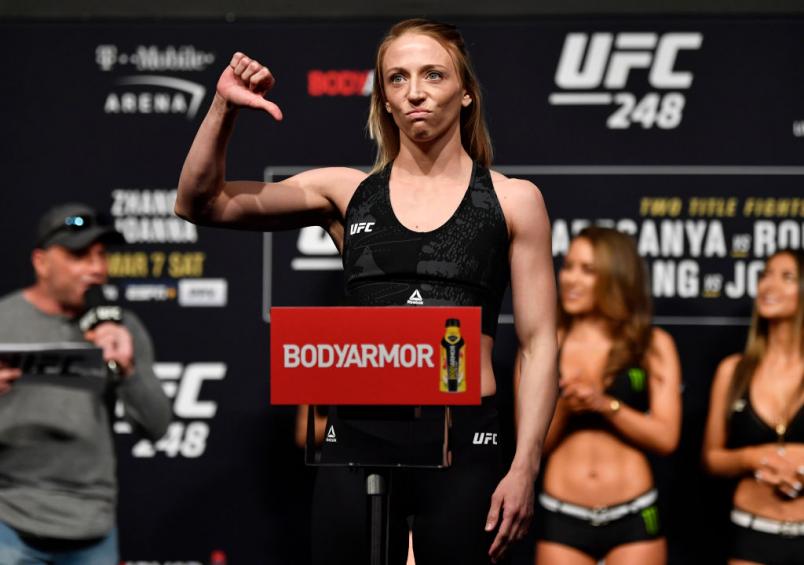 Friday morning, Whitmire stepped on the scale 1.5-pounds over the strawweight limit. She accepted a 20 percent fine, and went about the post-weigh-in routine of recovering and attending the ceremonial weigh-ins. As the hours passed, Whitmire still wasn’t feeling right. In the end, she pulled out of the fight, an experience she deemed “a fighter’s worst nightmare.” Because of the chaotic days leading up to the fight though, Whitmire could compartmentalize everything relatively easily.

“It wasn’t like I was eating Cheetos and donuts weeks before the fight where I’m like, ‘Oh Emily, you idiot. You didn’t do the work, you fat ass,’” Whitmire said. “I was really in bad shape. I was able to move on from it fairly quickly just because I know how f***** up I was. I know I would never want to fight somebody that was feeling like I was feeling. You would’ve been fighting a 40 percent Emily. I don’t want to fight somebody that’s not at their somewhat best. I wasn’t good."

More on UFC Vegas 8: Fight by Fight Preview | Fighters On the Rise | Rise of Aleksandar Rakic

Not long afterward, the coronavirus pandemic swept the country, and Whitmire, like the rest of the world, found herself with a whole lot of time on her hands. Instead of dwelling on the chaotic fight week and lost opportunity, she dusted off a sewing machine she bought a couple of years ago and dedicated her surplus of free time to learning a new hobby. She put her new skills to practical work, too, sewing more than 200 masks.

Soon enough, Whitmire and Viana rescheduled their fight for August 29, and Whitmire is particularly excited to “shut everyone up” about her mishap on the scale, make weight, and have an entertaining bout with Viana. Whitmire describes Viana as more of a “ground fighter,” but when pressed about what Whitmire feels is her own strength, she ponders the question for a moment before admitting she would rather just prove her skill-level with her performance. 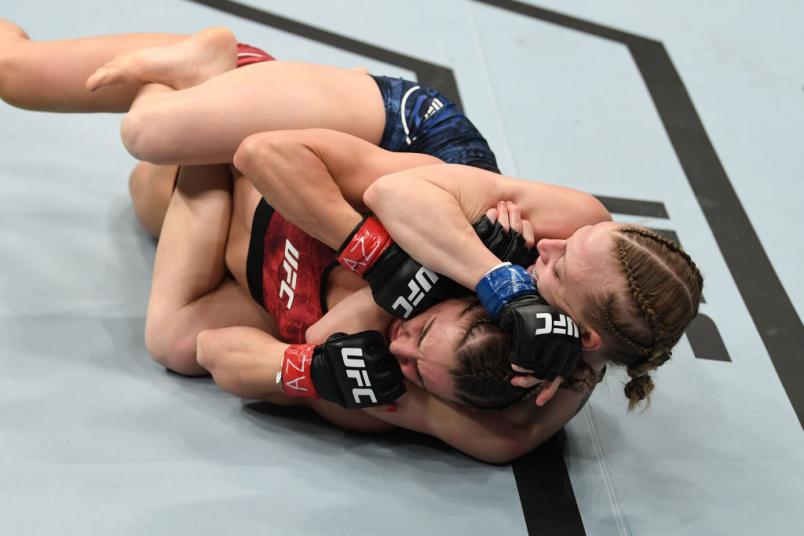 “I’m one of those fighters that started out doing MMA,” Whitmire said. “I fall under that new breed category. I don’t have a fallback. I didn’t start out striking or wrestling or doing jiu-jitsu. For me, there’s some days I’m going to the gym and feeling a little bit more tired and beat up, so my wrestling and grappling aren’t so great, and then my striking will be super on. And then other days, I’m just taking everyone down, submitting everyone. I would probably lean more toward my wrestling, my takedown ability. You don’t really see a lot of girls comfortable with shooting double-legs, where I have no problem shooting out in the open.”

Needing a change of scenery, Whitmire moved camps from Xtreme Couture to Syndicate MMA under the tutelage of John Wood in June. Working with the likes of Roxanne Modafferi, Joanne Calderwood and Sarah Kaufman, Whitmire has enjoyed the bevy of women with which to train and feels like the move could help propel her back into the winner’s circle.

On top of the benefits of having so many women in the gym, Whitmire has enjoyed the camaraderie among self-proclaimed “Syndi-chicks.” Alternatively, Whitmire said they also throw the “Broad Squad” around, which Modafferi doesn’t particularly endorse. 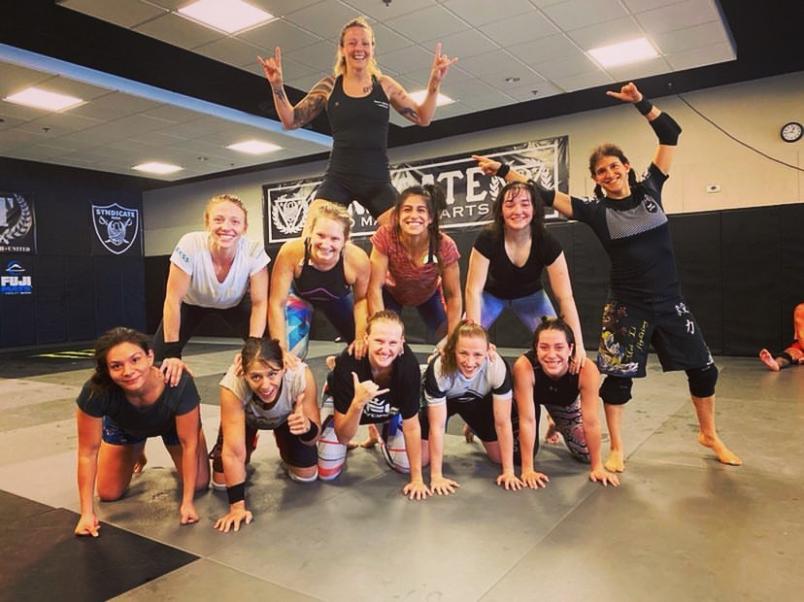 “There’s no ego,” Whitmire said. “Everyone goes hard. We all get good work in. We’re not killing each other, but we are working hard. We are social beings. I always felt a little bit like a loner at Xtreme, where the guys all had their little groups and best friends, and they were all nice to me and great to me, but I’m not a guy. I’m not one of the guys, so after practice when they’re all off in their little groups, I would just be kind of by myself a little bit. Now, after practice, we all talk and laugh. Your personal life really struggles when you’re fighting, and it’s hard to make time to have friends, and when you have all your female friends on the mat training with you, it lifts you up. You just feel so much better about life in general having girls around you with a like-minded mindset.”

She expects to feel locked in on fight night this time around, though, with more confidence in those in her corner than she felt previously, and she feels optimistic about securing her first win since February 2019. Ultimately, Whitmire is eager to properly show the fruits of all the labor she has put in since her last fight.

“I feel like I cleaned so much stuff up over the last year and really gotten a lot better,” she said. “I’m just excited to go out there to show everyone what I’ve been working on. You’re working so hard, and it’s your craft and you want to perform to the best of your ability. That’s what you put all the hard days in there for, to go in and show off a little bit.”